The Dragon Sector team put together a nice teaser CTF for the CONFidence security confidence held in Krakow. Here is the writeup for the exploitation task.

Let's see how the application works. Fortunately it works with stdout right away, and then it's bound to a socket later on, so we don't need to take care of that during debugging. This is also a minor hint for later, which I didn't realize at the time. So you can select an operation and then supply the argument count and the arguments themselves. Then you get the result along with a quote, which is unique for all operations.

One thing we can find without any reversing is an info leak. If we use 'pow' with just one argument for example, the other argument will be a leaked address (as an integer). Maybe this will be useful later on.

Let's fire up IDA and look for vulnerabilities.

We can see right away that the operations are stored in an array at 0x3B00. There is a name, a quote and a handling function for each operation.

First things first, we look at the main function.


The memcp used to find the operation that we want is a bit fishy here. It uses the operation's length when comparing, so we can essentially enter addAAAA... and still access the add operation. This will be useful later. We can see that the user input is 63 characters at max. Otherwise this function just looks up the opeartion and calls it's handling function with some parameters (format string buffer, n=308, the quote used and the input the user supplied).

Now let's see the handling function for the first operation (add). After some renaming, we get the following C code:


The huge red flag here is that the program is manually replacing the '%' signs instead of using puts on the output. There has to be a format string vulnerability here (or the creator of the task is just messing with us).

We know that the value of 'n' is 308. Unfortunately, we only copy 308 characters into the string, so every '%' will be replaced. But wait a second! If we could somehow overflow the terminating zero at the end of the buffer, the original user input, which specified the operation to use in the main function would also be printed. (Because this is the value immediately next to the buffer on the stack in main). Then, our format string would be evaluated.

The next step is a quest to look for the longest possible output. Here is the format of the string:

After some manual search, we find that 'tan' will result in the longest output. First of all, the operation string is the same one supplied by the user, so it's 63 characters at most. Then we have to find the longest integer we can supply. Since it is signed, we can gain an extra character with negative values. The longest value we can get is "-1111111111". Adding everything up, we get a buffer that is 307 characters long. But wait a second, there is a newline at the end we forgot to count! So we have our vulnerability after all. Let's test it now. 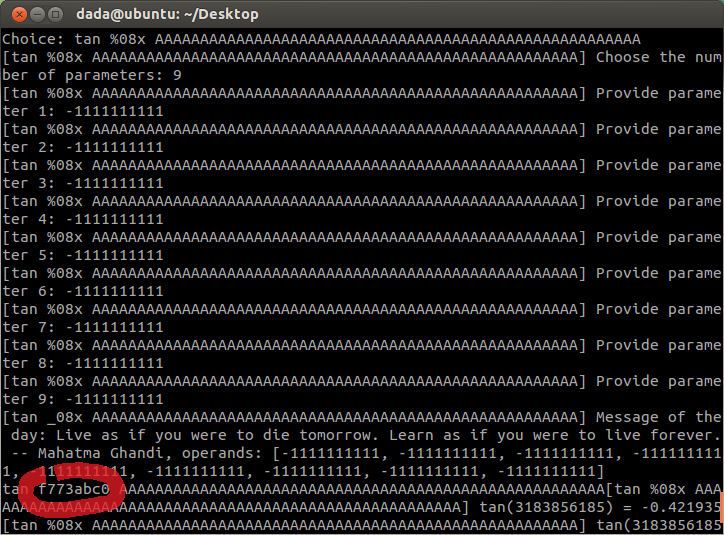 That's a beautiful address we just leaked there, and proof that our vulnerability works.

So how do we go about pwning the task now?

I made a big mistake here, and didn't spend enough time doing 'recon' before diving into things, and I missed that there is a very helpful function at 0x0D20, which basically calls system("/bin/sh") for us. All I saw was that system is among the symbols, so my idea was to replace one of the functions in the got with system's address (heh, very original, I know).

My idea was to replace memcmp with system, so in the next turn, our input is evaluated.

Fortunately the leaked address will be useful, because it's in the bss segment. It points to the buffer at 0x3BC0. memcmp in the got is at 0x3A78, while system is at 0x3A84. With this, we get offsets of -0x148 and -0x13C respectively.

Our goal is to write the value at 0x3A84 (or wherever it is remotely, we already know this from the leak) into 0x3A78. So we need one more step here, to leak the value at 0x3A84. It will also be relative to the leaked address. To do this, we have to start writing the exploit.


This function will send our payload and return the leaked value to us. The first address can be leaked like this:


How can we now leak a value at a specific address?

We can use the %s format to leak values. %s will pick up an address from the stack, and print the string located there. Another trick is to use %X$s, where X specifies the index to use from the stack. Now we have to find (locally, using gdb) where our input is on the stack.

Now that we know everything, only one step remains. We have to write (leaked_addr - 0x32D2) at (leaked_addr - 0x148). This is easy to do using %hhn to replace the value byte-by-byte. You can find the final exploit here: https://gist.github.com/balidani/ab8429bc7b59af7bed8c

Then, to get code execution we have to initiate a third calculation. This time, our input will be passed to system instead of memcmp. And this is what happens:

I think the tasks were very nice on this CTF, thanks to Dragon Sector! I will certainly be looking forward to more of their CTFs in the future.
Posted by balidani at 12:07 PM 2 comments:

This wasn't a very hard web challenge, but it was a cool idea and we managed to solve it first ("Quick, while tomcr00se is not looking"), so I'll do a writeup on it.


The site looks like it's trying to sell some security mechanism they came up with (patent pending, heh). The idea is that form fields get random names, so bots can't access the site. There is a sample application, where we can log in with "test / test" to check how their super secure solution works. 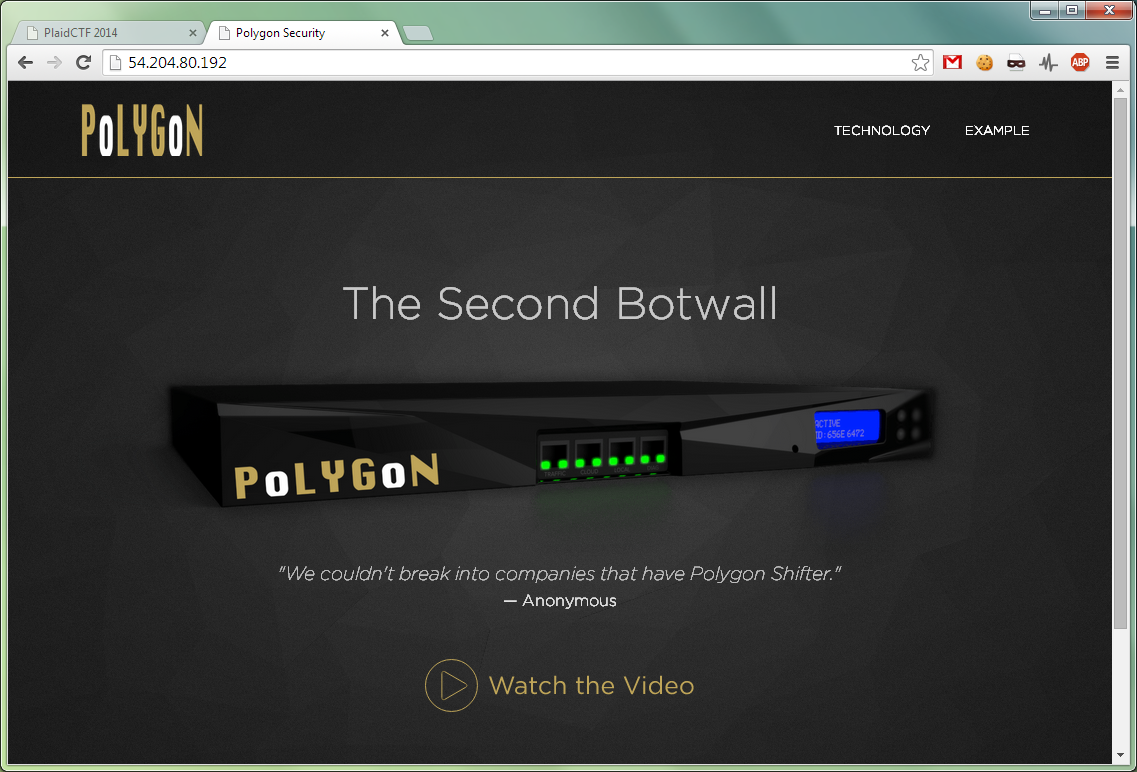 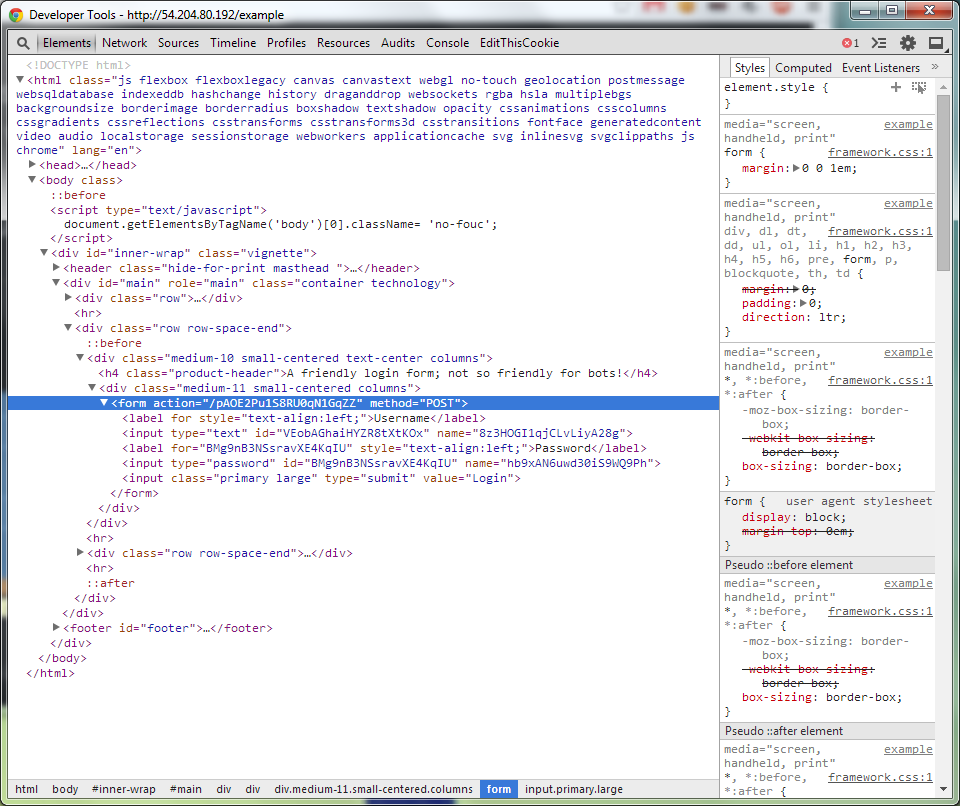 There is a HTML comment in the login form.


Of course randomizing names of a form won't protect you from SQL injection. This is what we get after logging in as admin: 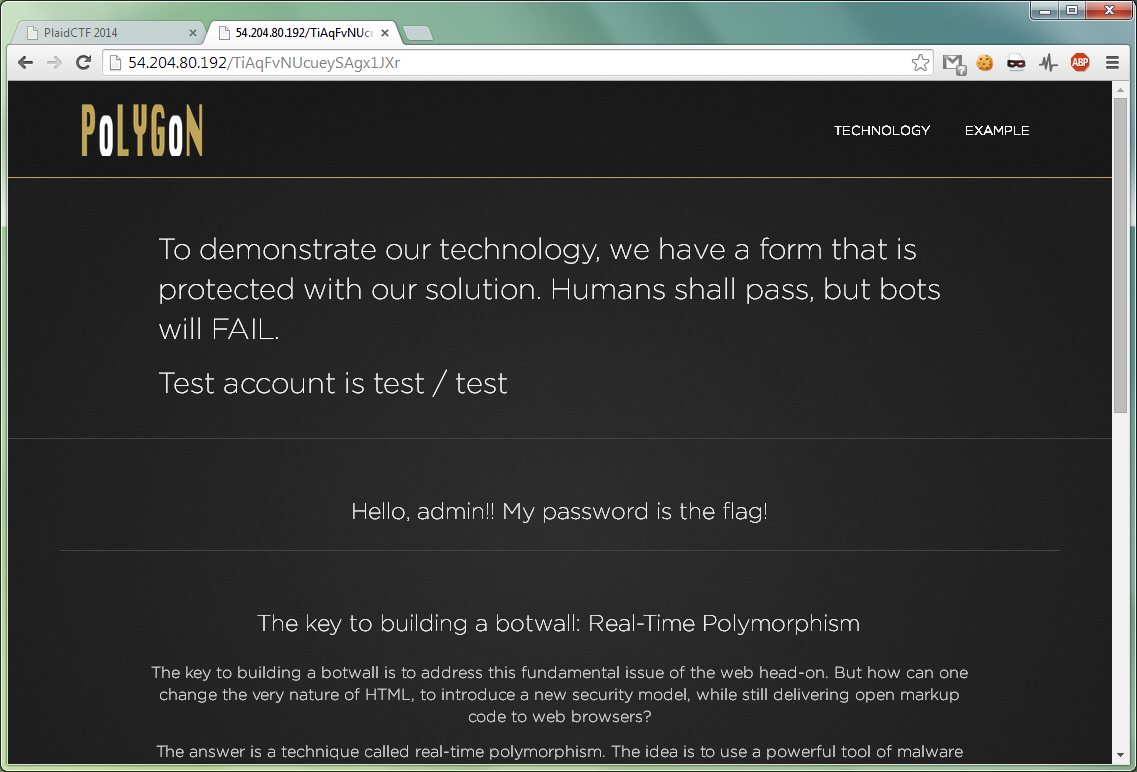 What is left is getting the password with blind SQL injection. Let's see if we can use bots after all. This is the code that bypasses the random names and logs in with a specified username:


Now we can plug this into our blind injection script, and it will spit out the table name, column name and eventually the password. Here is the final exploit: https://gist.github.com/balidani/e541f5ff39f6f3d41156

Awesome CTF from PPP, thanks for organizing it, I need to catch up on some work and sleep now.
Posted by balidani at 3:46 PM 1 comment:

This task was for 200 points, and it took us quite a lot of time to figure out. We still managed to get the breakthrough bonus on it, so I guess we were not alone with this.

When we visit the site, we are greeted with some ugly JS and a bunch of prompts. Chrome dies a miserable death once we enter the fifth number, and some processing starts. 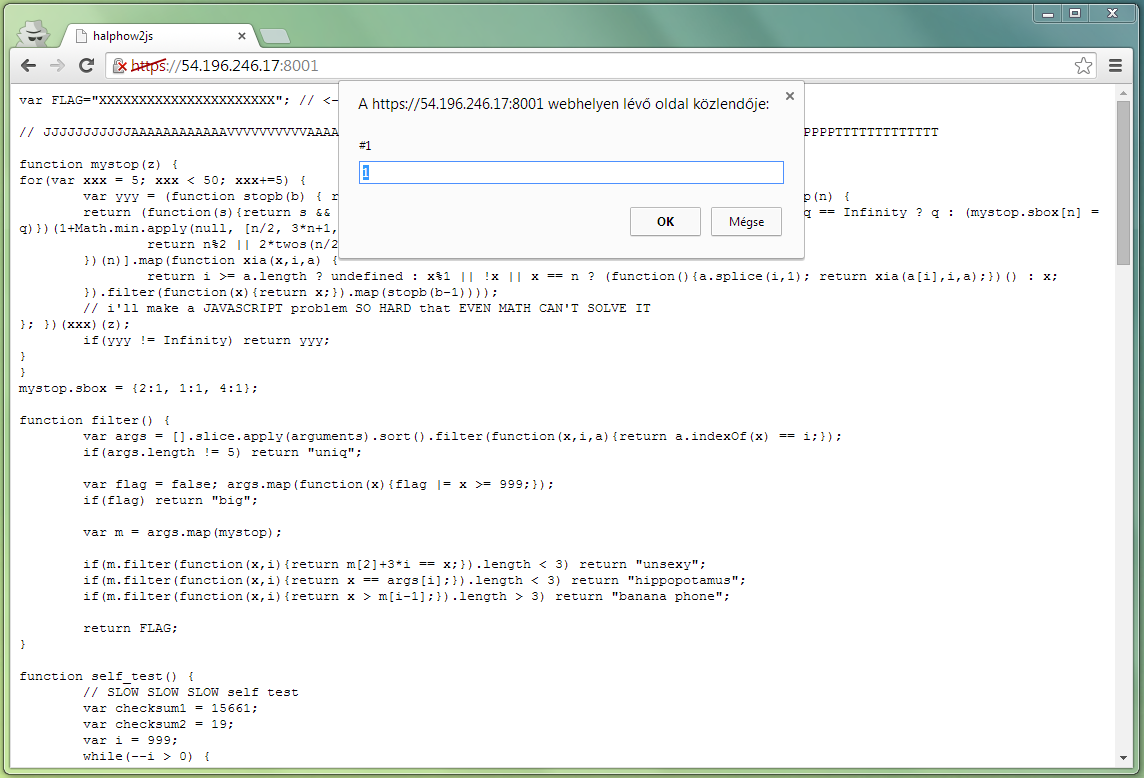 So if filter returns the flag, we are good. Otherwise, we start running the self_test, which calls the mystop function and takes forever to complete. Our next step (and mistake) was trying to figure out why mystop is slow and optimize it. I think this is a very common mistake I make - forgetting what category a task is and trying stupid things. Let's say that mystop is complicated and move on. I wasted an hour here.


Our next idea was to find all the 1000 values, except those that take forever to compute. We did this with a little script using Worker threads. We ended up with ~750 values. Needless to say, this was unnecessary work, but hey, it was 4AM. Let's (finally) look at the filter function that validates the key.

Oh, look, there are some checks that exclude a lot of values.


Edit: that last part is a lie, they are sorted by the filter function first. Thanks to @mathias for the clarification, here is his write-up too.

The strongest limitation seems to be number 4, since we hadn't seen many numbers that would map to themselves, only 6 and 1. So how can we have 3? This is were it starts becoming a web task. Look closely at the filter. It uses ==, which is vulnerable, since it doesn't check type. Bingo. One tiny problem is that the values we pass to filter will all be strings, since prompt returns a string. All we have to play with is parsing now. During testing, I found the following weird issue with mystop:

So this is how we can make a value map to itself, though this only seems to work for 2. The rest is easy, we can arrange our (mystop mapped) values like this:

Posted by balidani at 2:59 PM No comments:

"Another One" was a crypto task for 300 points, but according to the number of solutions, it was the second easiest. Nonetheless, it was a cool little task, so I decided to make a quick writeup.

The task description doesn't say too much about what to do: "This is a crypted image, you must extract the data.". Well, duh. After downloading the image, I realized that it's a bmp file. There must be a very good reason for using a bmp file here, otherwise it would be a waste of bandwidth. Let's look at the file in a hex editor. 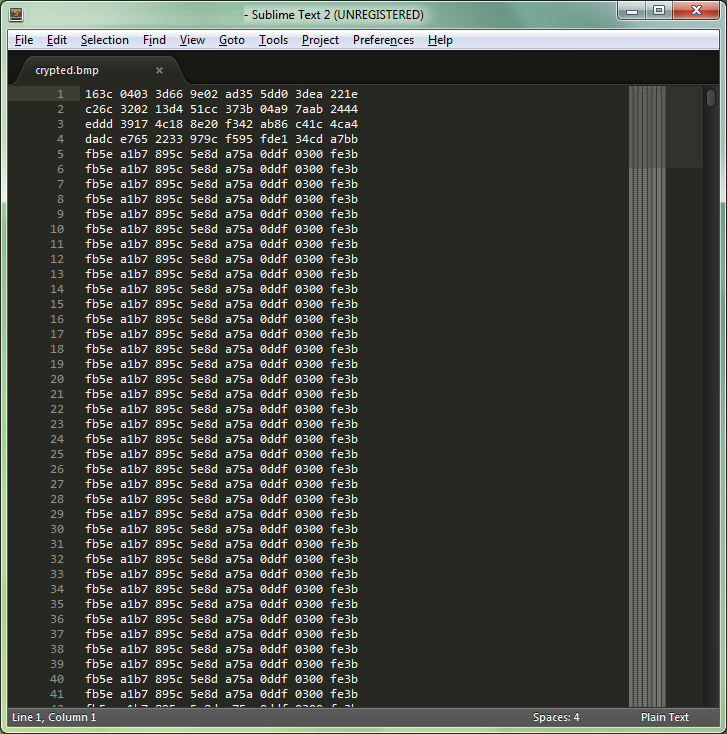 How could the bmp be encrypted? Could it be a simple repeating xor key? It could, but then why is this picture a bmp? A big hint here is that the repeating part is 16 bytes long, which is the typical block size for block ciphers. If it's a block cipher, the mode has to be ECB, since it's practically impossible for CBC to generate repeating blocks. If it's indeed encrypted using ECB, we have a solution. Assume that the repeating part is white, and display any block that isn't identical as a few black pixels next to each other.

Since the rows are reversed in bmp files, we can go from the bottom, so that the image won't be flipped.

There is one problem: we need to figure out the original size of the image, otherwise all we get is some mess. Let's try some numbers. Note that the size of the image gives us a clue about possible sizes. Fiddling around with an empty bmp file, 1440 * 960 gives a very similar result in size, so we can start off with 1440 as the width. Here's result. 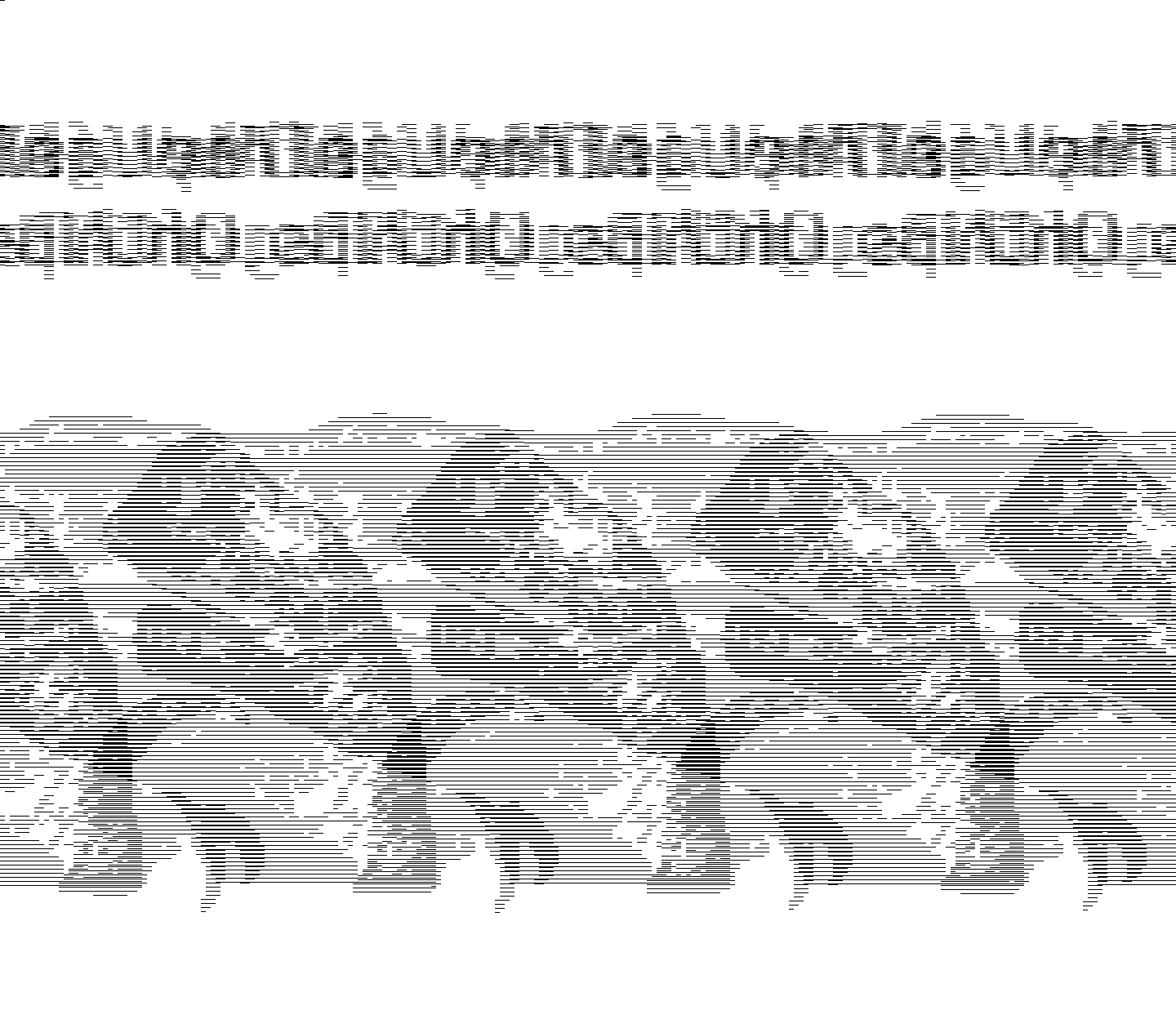 This looks like the philosoraptor and some text, but it's not perfect. Next, we can try 2880, since it looks like 4 dinosaurs are overlapped. At this point we got a bit lucky, because Ubuntu's image viewer is awesome, and after zooming out, it fixed most of the errors. Then we mirrored the image and got this.

It's not impossible to read the message now:

Here is the script that generated these images: https://gist.github.com/balidani/9999716
Thanks for the Nuit du Hack team for organizing the qualifier, we liked the challenges a lot.